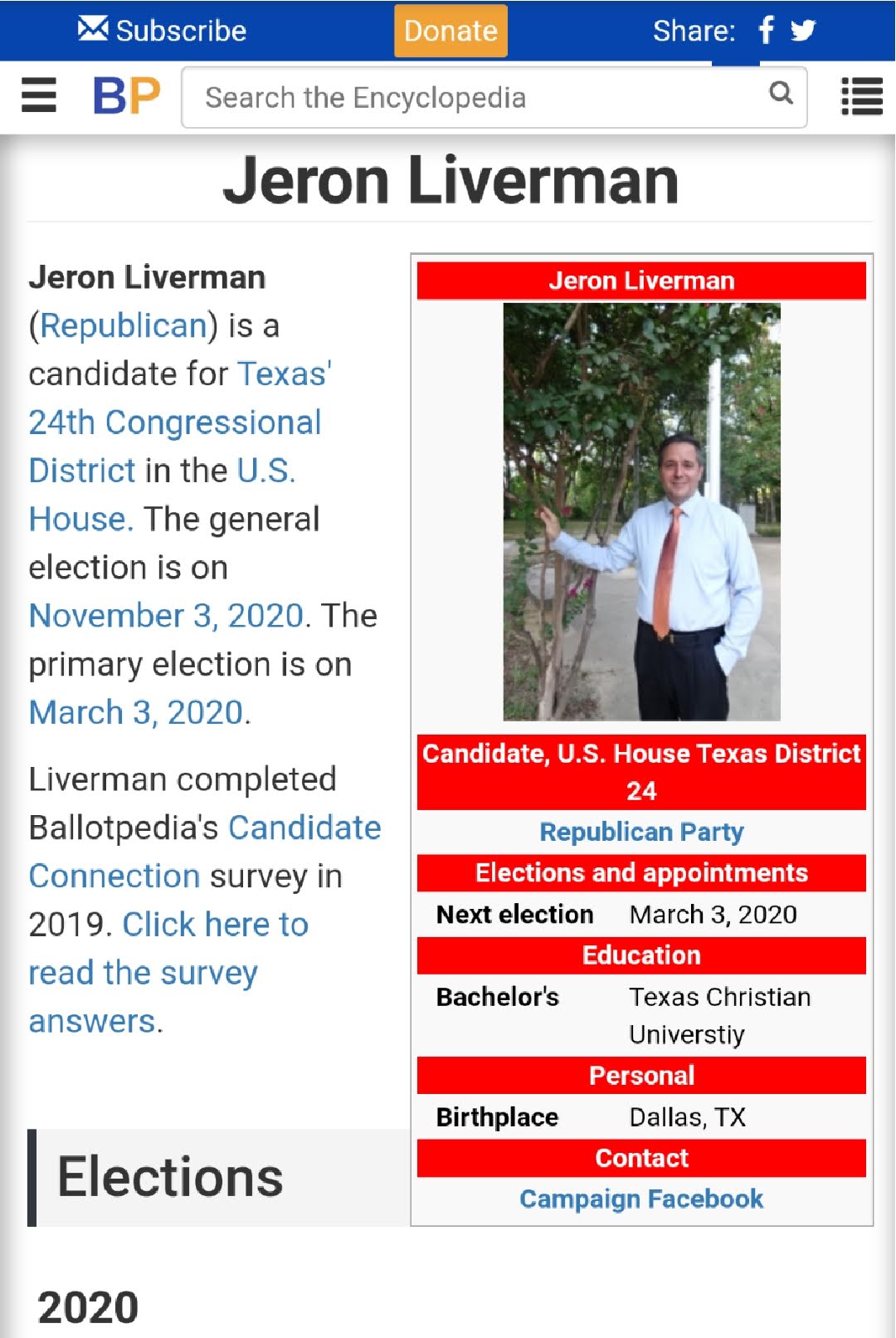 Per Ballotpedia's website, "... is the digital encyclopedia of American politics and elections. Our goal is to inform people about politics by providing accurate and objective information about politics at all levels of government. We are firmly committed to neutrality ...."

Ballotpedia link for Jeron Liverman: https://ballotpedia.org/Jeron_Liverman (Please read Candidate Connection survey at the site.  Or, read the Q&A content below.  This survey was completed October 24 and received October 25, 2019.)

Who are you? Tell us about yourself in 300 words or less.

I am a family person and a father. I reside within the boundaries of Texas' 24th District. I live in Bedford, TX. Some candidates don't live in their district, except for satisfying minimum requirement(s), just before election time. Why am I running for this office? Life is short. I am 50 years of age, which means "I've been there done it & can see much in the horizon." I have the time, desire, and freedom to fulfill this one endeavor, for my child and her friends; for my family and friends; for you and the circles of influence around you; for the people of this great country. Our Borders and Language and Culture are who we are. We share a blessed and stained past, which forged us into our current blessed nation. I believe our Borders, Language and Culture are too important to allow further erosion. I want the people, you and not the political insiders and their politicians, to have a choice. I was born in Dallas County (Oak Cliff portion of Dallas) and lived there as a child where I attended Tyler Street Christian Academy. Then, my parents moved to Arlington or Tarrant County, where I completed my secondary public schooling at Lamar High School. I later graduated from Texas Christian University in Fort Worth. I've been self-employed as a Realtor since 1992, ~28 years; I've been a real estate investor since the mid 1990's; I also worked as an independent contractor in a physician's office for a portion of the later years; and I am proud and honored to state, I've admirably performed as a stay-at-home father, for much of my child's life, allowing me keen insight into why the other side of the gender isle feels economically challenged. I have firsthand experience in the trials and hurdles our sisters-in-life experience with young one(s) in tow, in public. Due to the recent deaths of my folks, I have firsthand and personal experience in dealing with the chaos of end-of-life and lack-of-dignity issues our elderly face. Your vote counts.

Please list below 3 key messages of your campaign. What are the main points you want voters to remember about your goals for your time in office?

What areas of public policy are you personally passionate about?

Education is freedom. An educated society is a free society. An educated people are free from the ills of the past. The cost of post secondary education is too high. The cost of school loans are too burdensome for many college graduates. Many college graduates accepted their student-loan and its burden based on a dream and an all too often false-promise by the various schools. The free market (not a limited free market) should play a greater role in the price of a College or University or Trade School degree plan. This education should not be backed by tax payer guarantees or non-dischargeable debt burdens. Let the free market be free from limits. Health Care and Medical Care costs for our citizens are too important to continue on the current road of disrepair. I've seen and experienced what too many fellow citizens have experienced. When I processed insurance & benefit claims for patients at a Doctor's office, too often too many people would literally tear-up because their out-of-pocket expense was too [high]. These people were financially hurt because they knew the balance of the deductible would soon be known after the insurance company revealed the approved rate for the visit, which they would owe and literally could not afford. The choice between delivered medical care from a doctor or food-on-the-table should not be a painful decision for any family. An affordable cost to maintain your health should never be an issue.

I look up to my folks. Unfortunately, my father passed away in August 2016 and my mother passed away July 2019. My folks were very ill in their respective end times. They each faced different but equal adversity beyond comprehension. Even in the face of unfortunate medical diagnoses and the reality of harsh adverse health conditions, my parents presented a dignified face to all who saw the reality of their situations. I believe all of us deserve dignity. My folks showed me, in their actions, how and why life is precious.

Is there a book, essay, film, or something else you would recommend to someone who wants to understand your political philosophy?

My political philosophy has been earned by time, self reflection, and life experiences. Each of us have our own book-of-life or narrative to share. Upon self reflection, I believe one has to have lived enough life through the various ebbs and flows of life to truly serve the diverse backgrounds of any group of people. Generally, one has to be calendrical in age to have life experiences from birth to death: friends; foes; relationships; good and bad times; experience victory and defeat; enjoyment and suffering; and so on.

What characteristics or principles are most important for an elected official?

Fiduciary, place others before yourself. Integrity, be true to yourself and others. Character, do what you say you are going to do.

What qualities do you possess that you believe would make you a successful officeholder?

I listen. I seek to understand before I am understood.

What do you believe are the core responsibilities for someone elected to this office?

What is the first historical event that happened in your lifetime that you remember? How old were you at the time?

A memorable historical event that happened in my lifetime was the space shuttle Challenger disaster in 1986, when I was 16 years of age. Of course, the space shuttle Columbia disaster happened later in 2003, when I was 33 years of age. Both events are memorable to me because of the prior Apollo missions. I was born the same day Apollo 11 crew landed on the moon and Neil Armstrong uttered, "That's one small step for man, one giant leap for mankind." Due to my lunar birth, I've always been intrigued with everything space related.

What was your very first job? How long did you have it?

My first job was mowing yards. I expanded this endeavor into approximately 67 accounts for a few seasons. I eventually folded this time consuming hobby-turned-job as I neared completion of my college education, which I completed/graduated at Texas Christian University in 1992.

What qualities does the U.S. House of Representatives possess that makes it unique as an institution?

The U.S. House of Representatives is the "People's" house. More people are qualified/eligible to hold this office than other federal elected offices. Also, this division of congress possesses the power of the purse. Article 1 Section 7 states bills for raising revenue originate in the House Of Representatives.

Do you believe that it's beneficial for representatives to have previous experience in government or politics?

No. Career politicians and stair/side stepping politicians (politicians who incrementally advance from local to state to federal or lateral moves) too often find themselves believing they understand the pulse of the people represented. In truth, outside experience brings fresh ideas. I've been self employed since graduating college in 1992. I own my failures. I own my successes. At 50 years of age, I've lived long enough to have "life experiences" in the private realm. A government by the people is government who limits the terms of its representatives thereby forcing a more accurate representation of the governed.

What do you perceive to be the United States’ greatest challenges as a nation over the next decade?

It is the unknown "tragic" call at 1:00 am, no parent ever expects, regarding one of their children. Like the referenced unwanted call, our nation faces old and new challenges to keep its people safe, from internal and external threats to Life, Liberty, and Pursuit of Happiness.

If you are not a current representative, are there certain committees that you would want to be a part of?

I believe I could serve admirably in the Appropriations committee. Our government is at a crossroads. Our federal spending is out of control. I have been a successful business person with a self employed background. I believe I could be a steady thought for reason, as it relates to expenditures of money by the government.

Do you believe that two years is the right term length for representatives?

I believe two years is the right term length for representatives if ballot access and the election process from start to finish were much less (for example, 90 days or less). However, our current system (in Texas and likely elsewhere) is to long. Ballot access is effectively 1+ (it is 1 year, longer if you count preparation prior to access) year prior to the election, followed by 3+ months for a primary election and a possible runoff election, followed by about 8 months for a general election. Our current system means the office holder is always running for office instead of legislating.

What are your thoughts on term limits?

I believe term limits would be a positive for our country. I also believe a person should live within the same boundary of the office they seek. Furthermore, I believe a person should be eligible for the office they seek only after they have lived within the same boundary for a length of time that equals or exceeds the time that office serves (for example, a House seat is a 2 year term, thus a person running for a House seat should live within same boundary for 2+ years).